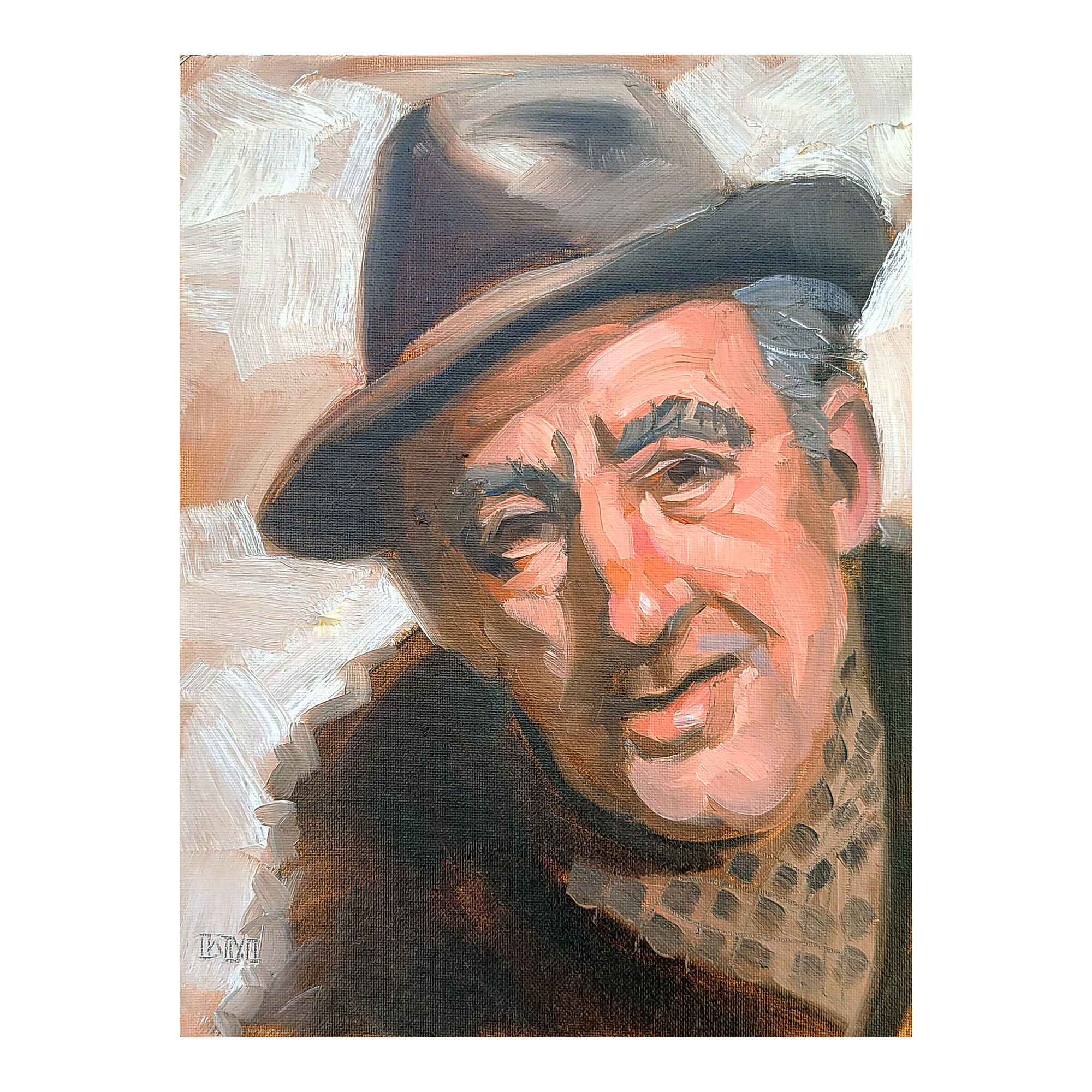 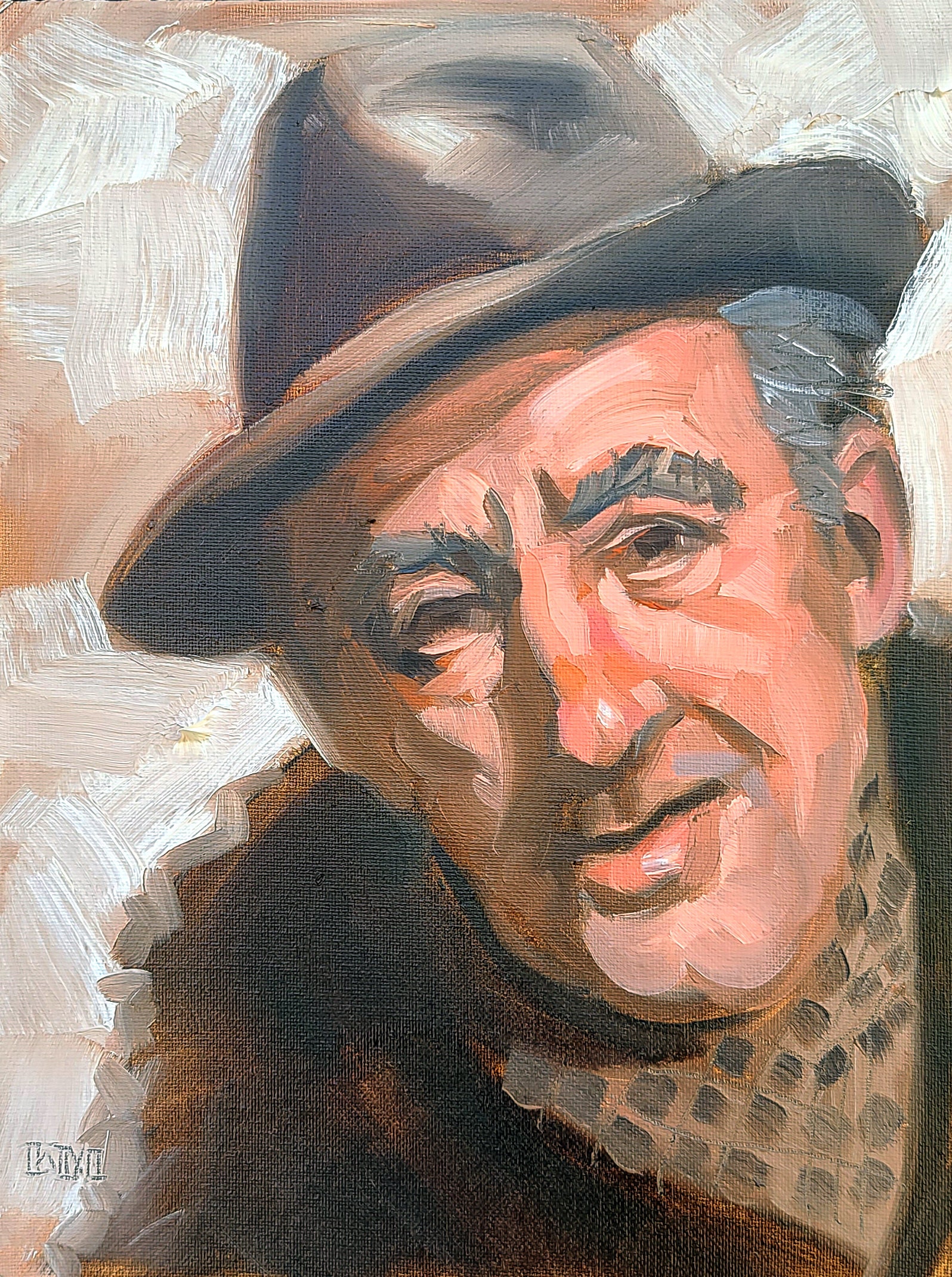 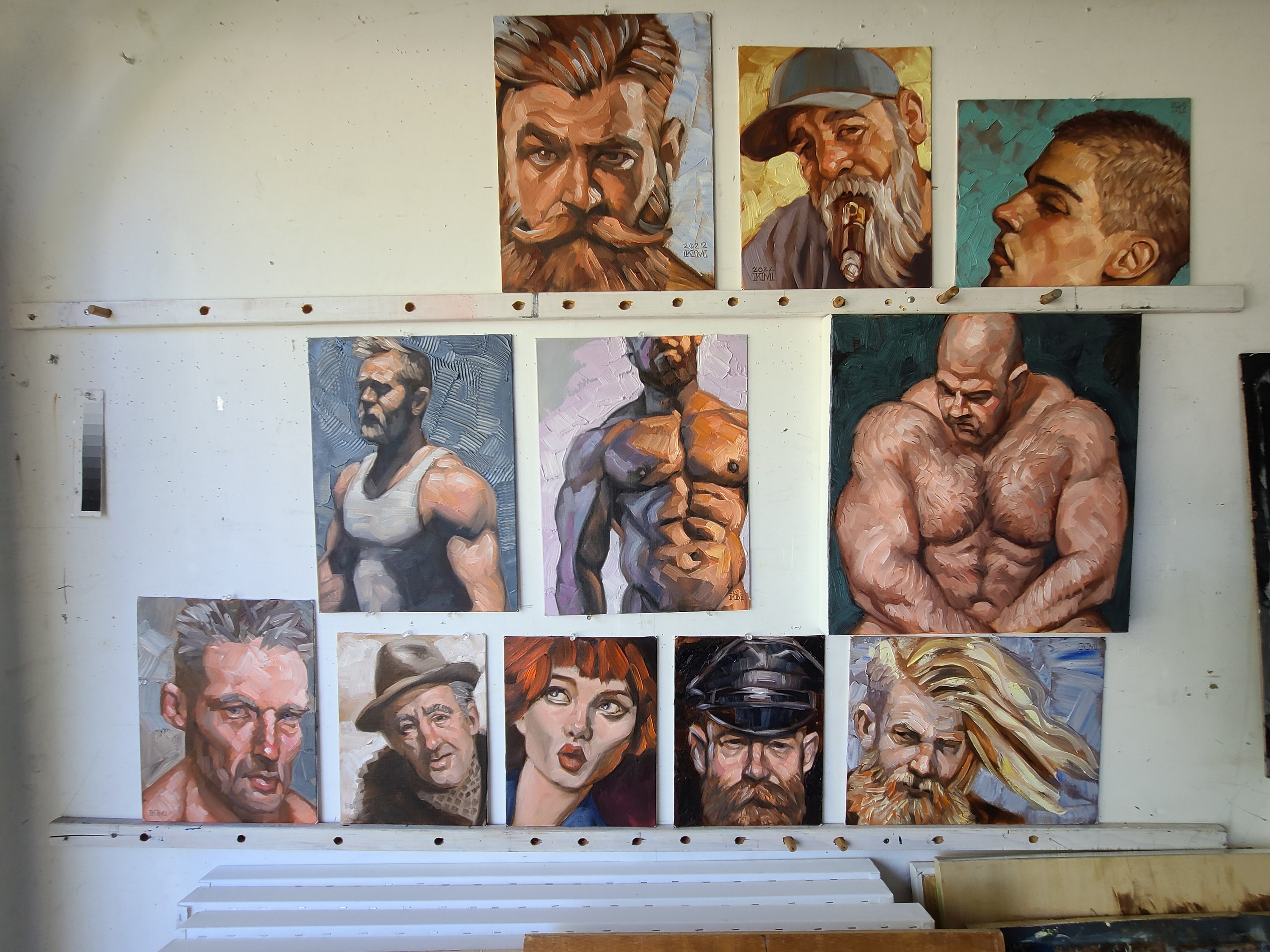 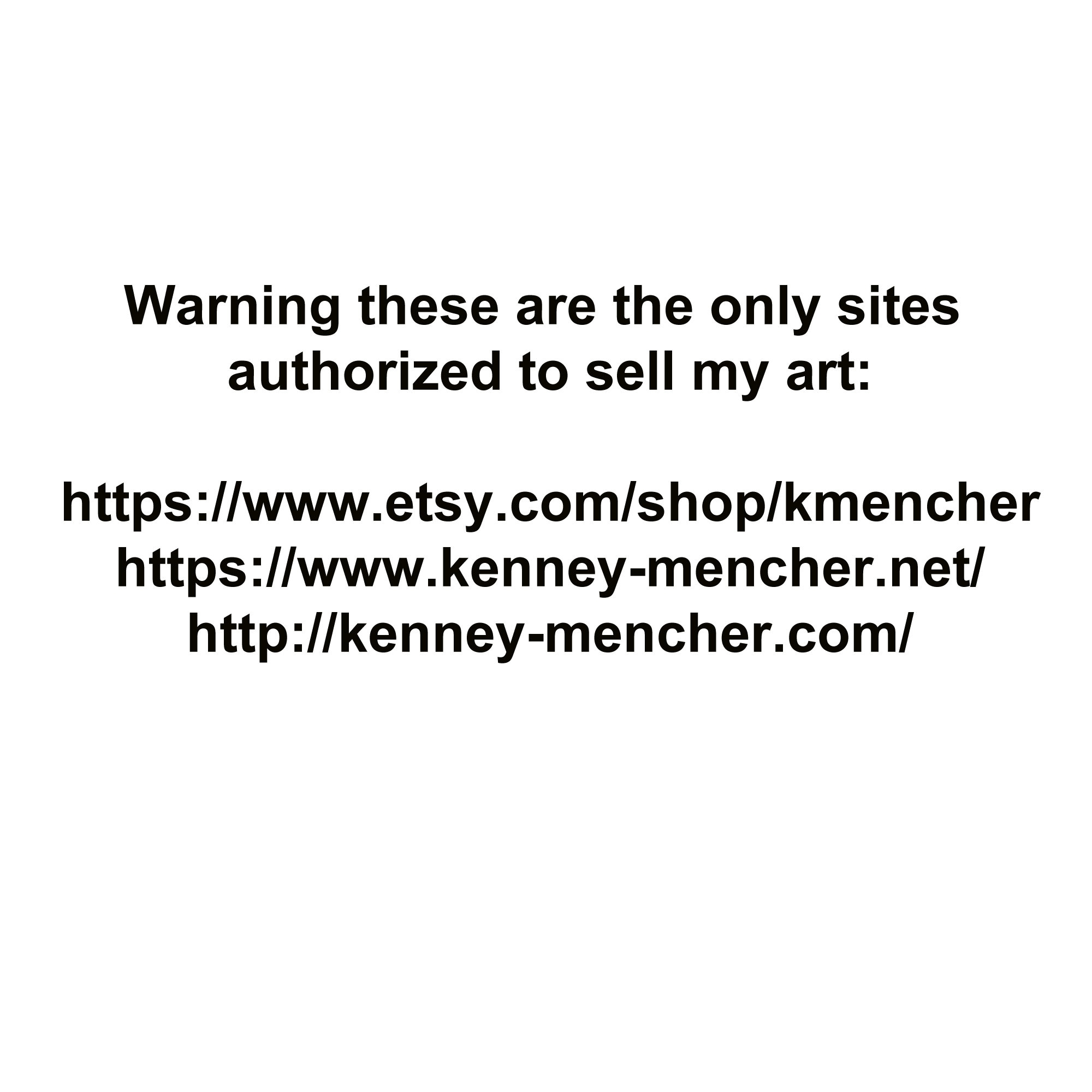 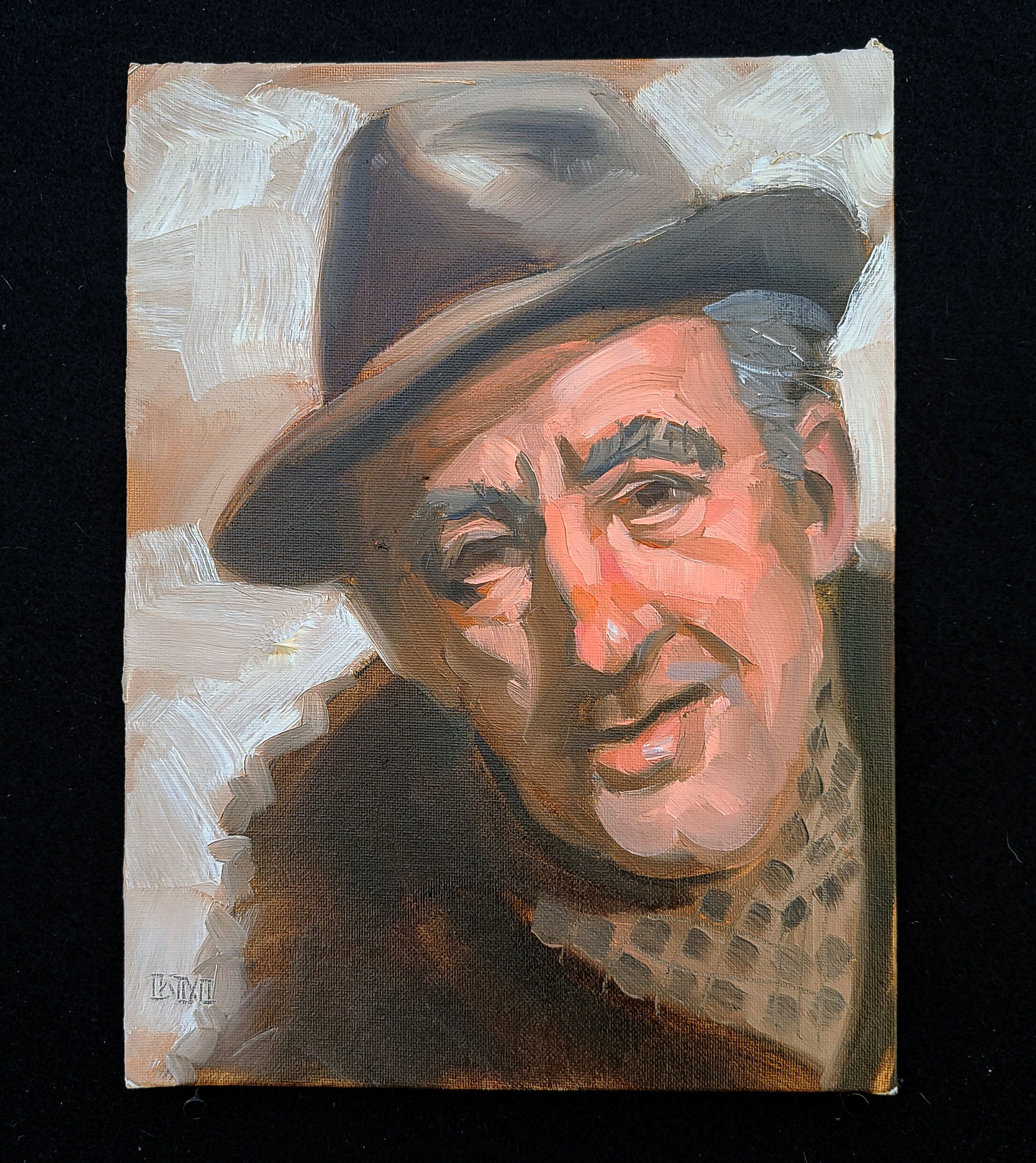 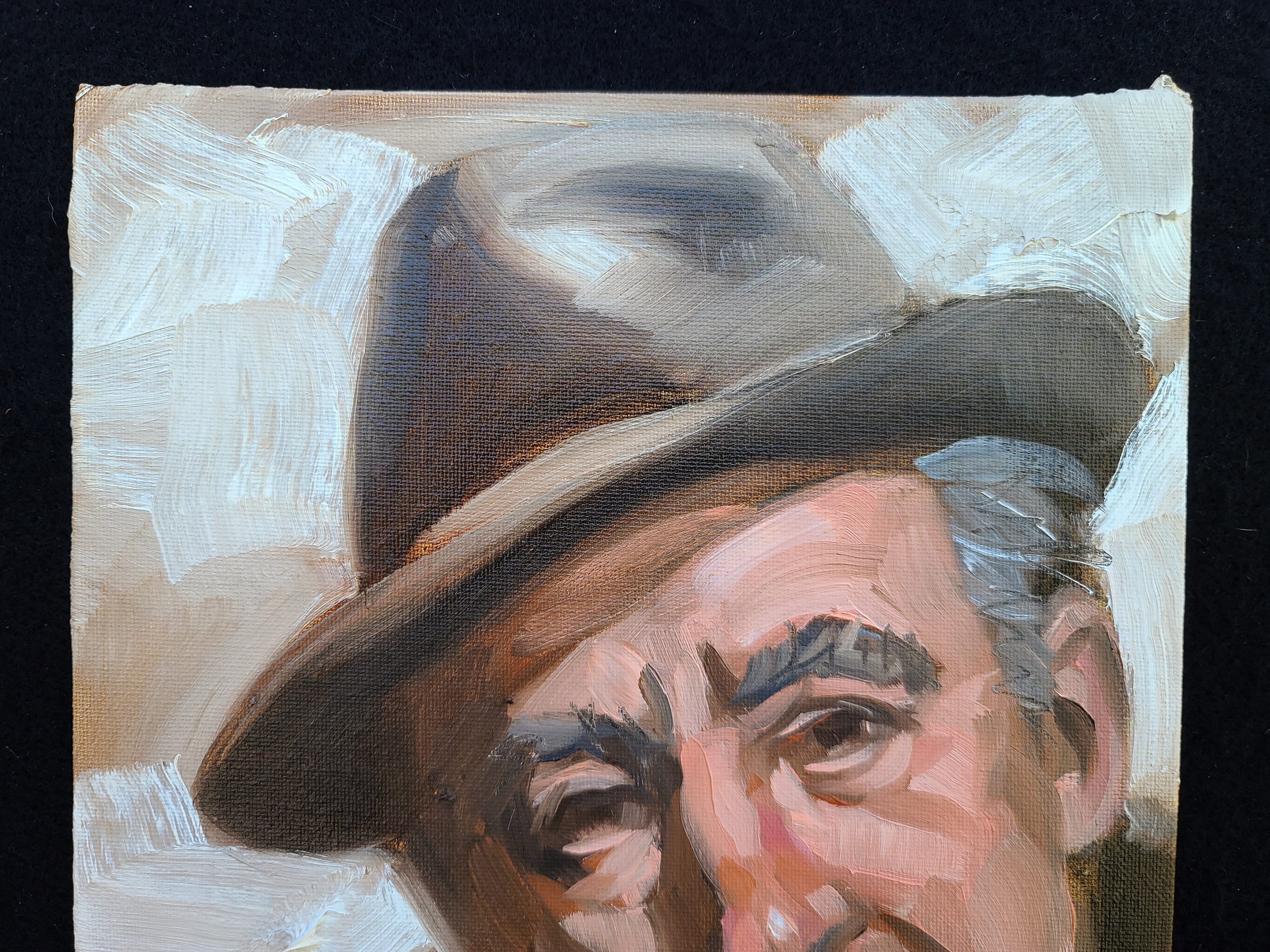 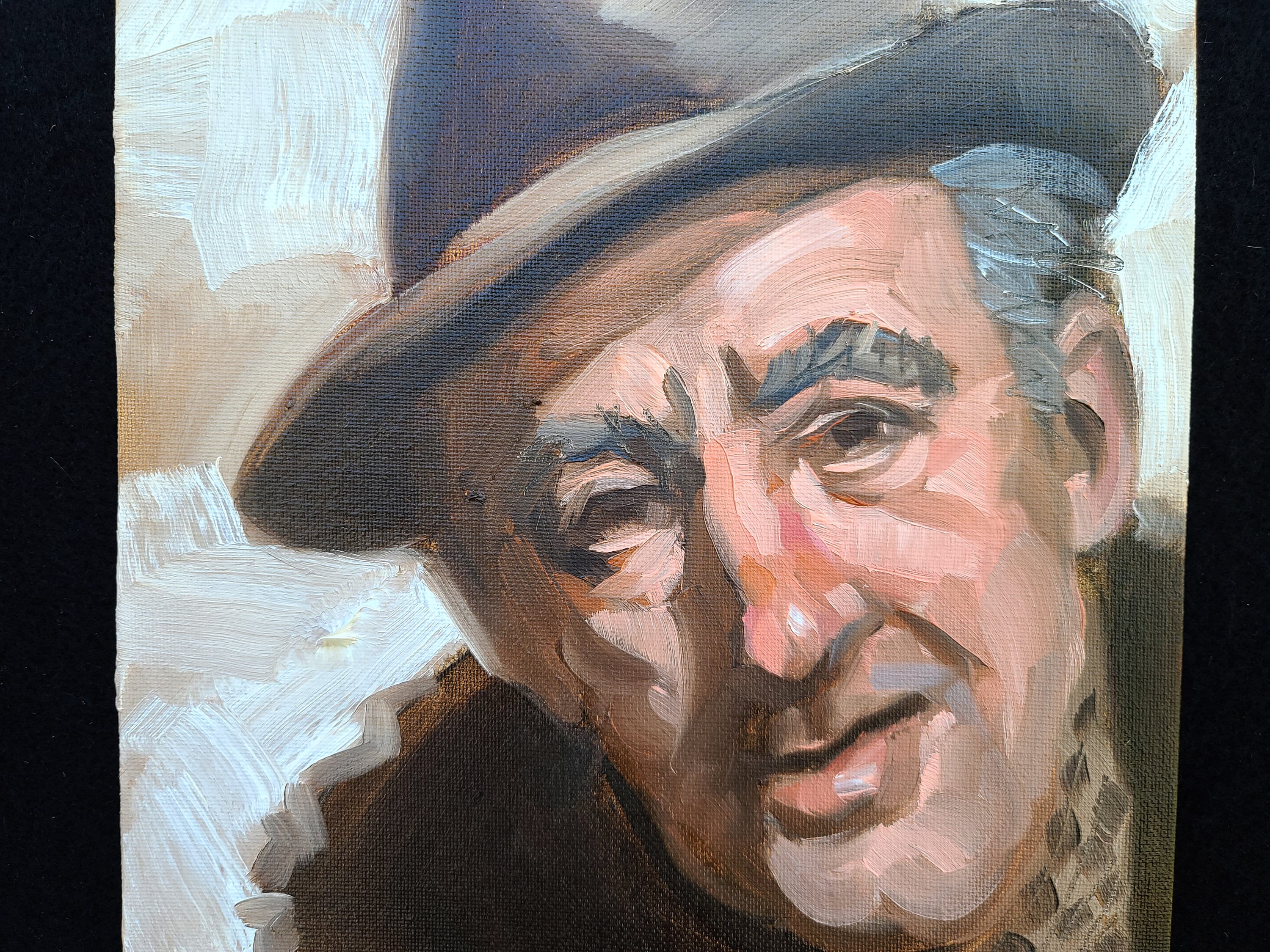 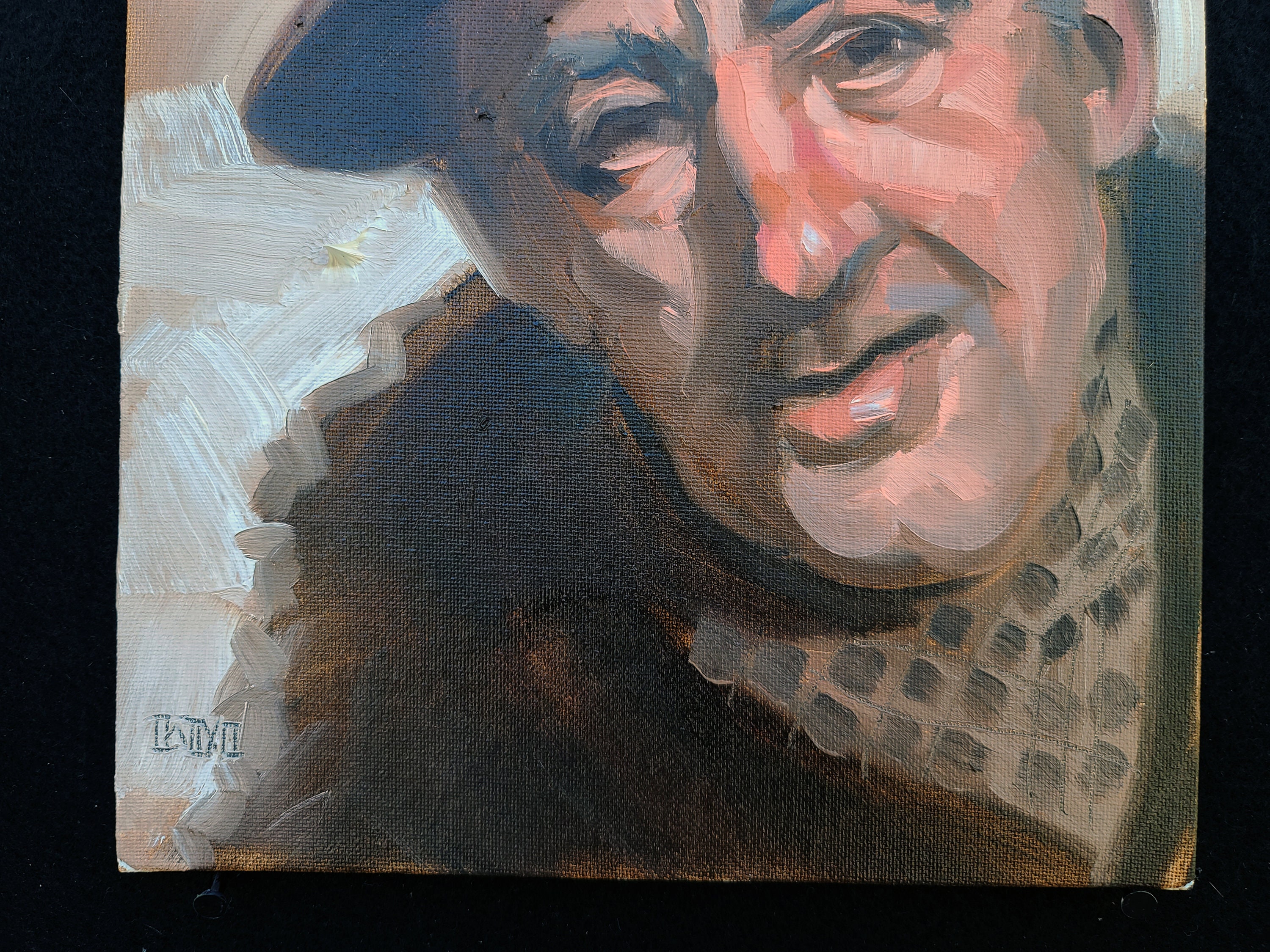 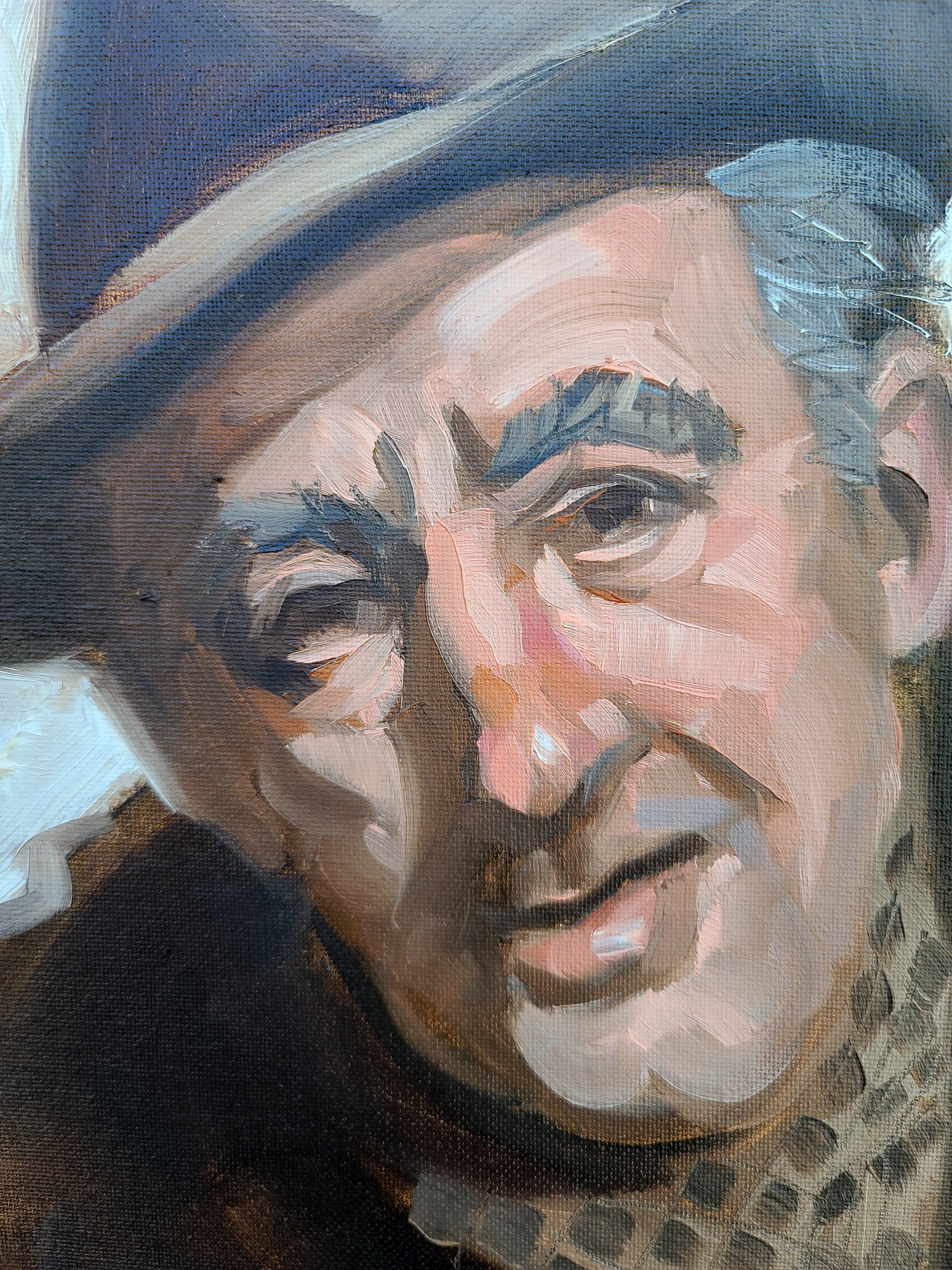 Sometimes you just have to do a kind of character study of an interesting face. This portrait of a the Jewish Geman movie star Sig Arno.

Sig Arno was a German-Jewish film actor who appeared in such films as Pardon My Sarong and The Mummy's Hand. He may be best remembered from The Palm Beach Story as Toto, the nonsense-talking, mustachioed man who hopelessly pursues Mary Astor's Princess Centimillia.

Arno was born in Hamburg, Germany. Before beginning to make films in 1920, he was well-known in Germany as a stage comedian.[1] He acted in 90 films in Germany – including G.W. Pabst's Pandora's Box with Louise Brooks – playing primarily comic roles, then he left Germany in 1933 due to the rise of Adolf Hitler. He worked in Europe until 1939 when he moved to Hollywood.[1]

During the next 20 years. he appeared in over 50 films,[2] often playing waiters, maitre d's and "funny Europeans".[1] Arno appeared three times on Broadway,[3] notably in the musical Song of Norway and the play Time Remembered by Jean Anouilh,[4] for which he was nominated for a Tony Award as Best Featured Actor in a Play in 1958.[5] In 1966, Arno won an honorary award at the German Film Awards "for his continued outstanding individual contributions to the German film over the years."[6]

I'm a big fan of portrait painting in the vein of John Singer Sargent and Malcom Liepke. Often I find pictures of characters on the web and make quick alla prima portraits of people with cool or interesting faces.

("Alla Prima" Also known as ‘direct painting’, ‘au premier coup’ or occasionally mistakenly as ‘wet-on-wet’, alla prima is a one-layer painting technique in which the painting (usually painted from life) is completed in one sitting or while the paint is still wet.)

About the artist, Kenney Mencher,

Hat in hand, the man in a suit and tie stands next to a pile of what appear to be library books, but his gaze isn't fixed on anything academic. What catches his eye is the blonde seated behind the desk in a provocative pose that reveals her black garters and well-toned legs.

To the artist, Kenney Mencher, an associate professor of art and art history at Ohlone College in Fremont, the painting presents an uncertain scenario each viewer is invited to interpret individually.

To employees at a state building in Sacramento, it was artwork that made them uneasy and didn't belong near their work space.

Along with work by two other artists, Mencher's paintings went on display April 9 in an informal exhibition of teachers' artwork at the California State Teachers' Retirement System offices. One work day later on April 12, four of Mencher's paintings were removed after several employees complained.

"Some of them are rather risqué,” says Kirsten Macintyre, a spokeswoman for CalSTRS. "There's one of a woman sitting at a desk with her skirt hiked up and her garter showing, and there's a man staring at her. It's suggestive and it's not appropriate for a state workplace."

The department policy prohibits the ". . . displaying of sexually suggestive objects or pictures, cartoons or posters."

Mencher says he doesn't disagree about the removal of this painting, called "Reference Desk." or another canvas called "Macys" in which two women face each other through a doorway. One is seen from behind in a camisole-style top, while the second, wearing a bra, turns toward her.

But Mencher, 39, a Palo Alto resident, says he's mystified about the removal of two other paintings, one of two boys playing with water shooting from an uncapped fire hydrant and a scene of a svelte young woman in a sleeveless dress and heels standing beside the passenger door of a car.

Mencher says he strives to depict subjects with ambiguous meanings, something like an artistic Rorschach test in which the viewer examines ink splotches to decipher underlying significance.

"My feeling is if women feel uncomfortable with (these paintings), they're definitely bringing their own baggage to it," Mencher says.

Painting in a realist tradition reminiscent of illustration work of the 1950s, Mencher says he often gleans inspiration from the era's films and magazines.

And while he says his work is popular with many viewers and has sold well in recent years, this isn't the first time his choice of subject has sparked controversy. His three-year relationship with HANG Art gallery in San Francisco came to an end in November over similar issues.

"His work started to go in a direction that didn't feel like a match for the gallery,” HANG Art Director Michelle Townsend says. "It was clear he wanted to take his work beyond what the staff was comfortable with."

Townsend calls the parting with Mencher amicable. Representing an artist and his work well, she says, calls for enthusiasm from gallery staff members, something that had diminished among HANG Art employees, most of whom are women.

There is a frankness to Mencher's work that Townsend calls unabashed.

"There's a cheesy side to all of our fantasies that Kenney is interested in, and as consequence, some of (his paintings) are funny and overt," she says.

Personally, Townsend says, she supports Mencher's artistic drive and encourages him to "go crazy in whatever direction he wants to go." But if she had been the curator of the Sacramento exhibition, she would have been more conservative in choosing which of Mencher's paintings to show.

There are several ways a curator could approach such situation, says Mitchell Schwarzer, chair of visual studies at California College of the Arts.

"What often happens in museums or galleries, they'll put a warning (in the) wall text: 'The work has adult content that is sexual or violent,' "Schwarzer says.

Viewers should be forewarned, he says, when they're about to encounter challenging artwork.

"It's very much like when you go to the movies,” Schwarzer says. "The rating system is letting people know that they're getting into."

"No one should be forced to view potentially offensive art in their place of employment, but neither should art be banished from the work place altogether," he says. Where space allows, Schwarzer suggests placing controversial pieces in a separate room accompanied by a warning label.

It's a tactic, that would allow the public to choose whether to view the art, while remaining respectful toward the artist and his work.

Whenever art is incorporated into public spaces, controversy is bound to follow, particularly as viewers become more vocal about what they will and won't tolerate, Schwarzer says.

That's already proven true for Mencher, who has received inquiries from several galleries interested in displaying his paintings. He has no intention of taming his future work.

"It made me feel good that people had such strong reactions to it,” Mencher says. "Maybe I've got my finger on something that ought to be scratched."

James
Rated 5 out of 5
Great service. Delivered quickly and securely. I love it. Kenny's work is amazing.


AJ
Rated 5 out of 5
Kenney’s pieces are even more amazing in person. The pictures offer a great reference but don’t do the detail of his work and brush strokes justice.

Jake
Rated 5 out of 5
Kenney never fails to impress with the quality of his work. So happy to have another beautiful piece in my collection.


13aarongreen
Rated 5 out of 5
This painting came in the mail today and it is even better in person than the image on Etsy! The well-chosen colors, interesting and perfectly constructed composition, and the great use of brush strokes to define the musculature, all indicate that this painting was made by a master artist. I would be remiss, too, if I did not also thank him for his great service, quick shipping, and all the extras he sent along with the painting, itself. Thank you!

Brian
Rated 5 out of 5
Finally got it unpacked. It would be difficult not to slip into hyperbole. A magnificent painting I am thrilled to add to my collection. Thank you so much!

Mark
Rated 5 out of 5
Perfect.

Procopio
Rated 5 out of 5
Amazingly-beautiful!!! I love love love it. Becoming a big fan of the artist. I would highly recommend him. Will be buying more if he paints more silver foxes for sure I’m very excited to own this piece.

Mitch
Rated 5 out of 5
Great communication with the artist regarding the shipping process. When the package arrived I was very impressed with the care taken - the padding shows he values the work as much as I do. Surprised with the extras he slipped in the package - a watercolor study for the diptych, a program detailing his works and history, and several notecards (that will probably end up framed as well). I’m so happy to have found Mencher’s work.


KC
Rated 5 out of 5
Another stunning piece of art from Kenney Mencher! I'd had my eye on this one for a while, so glad I finally had the chance to add it to my collection. Thank you, Kenney, for sharing your great talent with these fine works of art.

Dan
Rated 5 out of 5
Fantastic piece of art. Just love it x

Harley
Rated 5 out of 5
Painting is stunning and I love the imposto thick paint technique the artist has used to convey emotion.

iicarus
Rated 5 out of 5
I am in love with my newest acquisition. The vendor kept constant communication, and the parcel arrived meticulously packaged and delivered quickly. I will definitely be purchasing more from this store.

Vincent
Rated 5 out of 5
Perfect addition to our collection. Looks great!

Vincent
Rated 5 out of 5
Looks even better in person. I appreciated having a variety of print sizes to choose from.